The water technology used to power the secret sub is in space.
Posted by DGPhelps at 6:18 PM No comments:

If Judaism had a law which made slavery legal and automatic to Jews, would it be a legal religion to practice in the United States?

v
Posted by DGPhelps at 6:55 AM No comments:

This Country Is Not Here

My life has been systematically destroyed by this government. It can no longer be denied that each moment of my existence has been reduced to a state of virtual imprisonment where I cannot live free.
My first film "Figures" was literally stolen by the competition who got together with their powerful friends in Burlington, Vermont to libel, starve, censor, imprison, beat and intimidate me. Cops told me directly to stop making my film because the competition would be 'more qualified', also that I should 'stop making art altogether'. It happens to be a thirty year prison sentence for a single conviction of Copy Trade or Service Mark Infringement and a $1 million fine (both maximums) and they had committed their offenses right on tape as if they were just taking another shit on their home toilet.

The list of crimes against me is so long that I couldn't squeeze them onto a single page. Right now, the competition for my work is the State. Oregon, Federal government, Vermont-- they are all under the same Fascist rule. This is no opinion, I am not being allowed to make money or contribute to the world culture with my work but the State is slaving me. Leaving the country is going to require some drastic solution because I live basically hand-to-mouth in terms of money, I am barely able to survive and that's with considerable help from family.

Most apparently, my movies are being stopped from completion. Also, I began a serious true-crime book about the Zodiac Killer and Black Dahlia killers (whom all connect) and that was stopped. The regime stopping me from these projects are cops with their masters. There is no doubt that the police are enforcing their criminal rape ring dominance into a business dominance so no media gets out without their approval. There may have been a difference between corporate power and police power once but there is no visible line now. Murders and rapes, abductions and intimidation...these are standard practice for the mafia running our business.

This is just business, after all. The United States government became the competition with its people so there's no chance for us to earn anything or export unless you are the government. The amount of crimes being done just as the second you are reading this are enough to kill many times over, and it's not just me! It's the children of the rape victims who are being sexually defrauded by a mad rapist child pornographer who works for the State Senator involved in one of the rapes. My local girlfriend was sexually assaulted and the predator mentioned wanting to murder me, mentioned he was employed by a movie studio.

The Park Slope Rapes in NYC happened in my opinion because of my "Figures" movie being produced but the competition wanting it to be stopped from production. The reason I believe this is that the first day of shooting my film about real rapes (which was a collection of stories in survivors words, depicted by actors with an art motif, original fine art to sell with the film to raise money, and original string quartets for each vignette). The first day we began to film, there was an officer parked on the sloping driveway of the Chittenden County Courthouse. The Officer seemed to stare at us directly but the sunglasses she wore made it impossible to tell if it was just in our direction. My apartment was a few doors down from the Court and from the Park and Police Station (which wound up adding quite a bit of stress, since they were all racketeering against me).

Well that's strange because parking there is definitely not safe or legal. The area is a depot center for Sheriffs to transport prisoners which they do even on weekends and it's nowhere near a parking lot, there's never once been a cop parked there before or since in the 10+ years I lived there, there was no action visible on the street taking place which the cop was observing for some visible purpose...so I thought the cops were fucking with me again, had read my private emails with their big DHS or whatever-cop powers and strategically placed themselves there to be Intimidating again. I didn't mention it to the model who was oblivious to all of this, we carried on and filmed some stuff in Battery Park.

She was wearing a mini skirt and she had long fiery red hair, very sexy and normally a model. The scene was romantic and intended for art post-production rather than lines or acting kind of use in the film, but it would have seemed more like a modeling session to an observer if they watched us. Anyway, some of the work was on the sloping section of the park which faces Lake Champlain. We wrapped in an hour or so, planned another day.

Park Slope in Brooklyn NYC had a series of rapes occurring with an MO that targeted women resembling the model I worked with on that day we shot "Figures". I joined a chat group on Facebook about it, read the news and determined after some weeks that it was related to the Burlington Police Department, in my mind for sure. I imagined they were working with the NYPD at some level to continue the rapes, in protest of my film production. This took a hell of a lot of consideration to determine in my mind it was the reality and when I believed that, I actually stopped the movie from being made. It made me feel responsible for cops assaulting and causing people harm, only for my being a competing filmmaker. So if I stopped making the film, the rapes in Park Slope would stop. I stopped the film, the rapes stopped.

My new film "Raiders of the Lost Clam!!!" has been defrauded by the same government only Oregon got involved now. There's a fake shooting in Newport which occurred moments after my court by telephone appearance in Vermont with the journalist who smears my name, rapes my previous film's
content providers and removes our stories, steals the money, forces us to experience Rape Trauma Syndrome all day and night (endangering our lives). The shooting victim resembles one of the stars of my movie and it's a strong resemblance. During the post-production I managed to crack the Zodiac Killer Cryptogram and publish the results online. Then a bizarre news story appeared from Newport Oregon and a major crime followed it which involved the disappearance of a woman I knew from the grocery store there.

The same journalist who is raping my previous collaborators for "Figures" and me predicted the disappearance of Katy Roe, the grocery store worker. He did it slimily with a devilish detail and it does involve a *RUSSIAN PLANE* and a pilot of it. There's a "Wing Wa"/"Wings" motif to the crime by this sick journalist Ken Picard of Seven Days news, Roe disappearing from a restaurant called "Wing Wa" 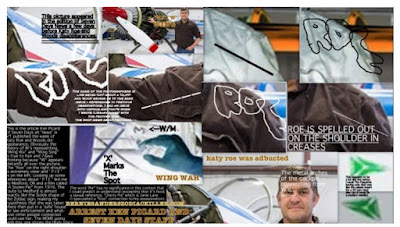 Posted by DGPhelps at 5:00 AM No comments: