One of the hypotheses put forth by my "Sword of Christ" book which is now in the research phase is that pyramids used advanced tech to make use of genetics. "Genetic Amplification" is the same as time travel, space travel and powerful weapons.

Take this example-- those who have taken the time and trouble to build replicas as a light bulb were missing a few big clues!

First of all, the fact there are two serpents is a clue we are dealing with genetics. But then the next example... 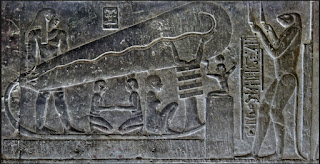 gives the next big clue where the arms holding the snake inside the tube/pod are coming out from a stand of some kind, some technological device resembling a square ashtray ...notice the *arms are inside and outside the surface*. So these arms are being produced by the device potentially. They may very well have bred beings with a genetic repository, hence Thoth and other animal-people would be perfectly normal to see in reality since they can hybridize life.

And genetic amplification ties into the nature of immortality which is what the Jewish-Roman war with Jesus Christ was all about-- infinity, slavery and immortality.
Posted by DGPhelps at 10:39 AM